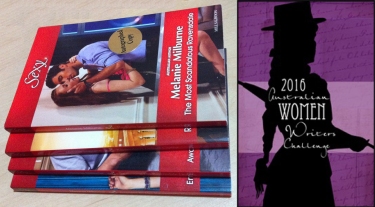 Melanie’ Ravensdale series. The Ravensdales in question are the sons and daughters of famous theatre actors Richard and Elisabetta Ravensdale – except for Kat, the heroine of book four, who is Richard’s illegitimate daughter.

Kat’s mother tells her on her deathbed that Richard is her father and that he paid her many years ago to have an abortion to preserve his reputation and his marriage. Now the press has found out about her existence, and Richard is trying to make amends. Kat wants nothing to do with him. She knows he is only interested in ‘damage control’ not in her. In fact, she’s furious the press has found out because her dream is a career in theatre, but she wants to make it on her own not on the back of the family name. Is that even possible in a world where image is everything and the gossip of the gutter press knows no bounds? When Kat is labelled the most ‘scandalous’ Ravensdale, it is not a synonym for outrageous but acceptable behaviour from yet another famous-for-being-famous celebrity but a hurtful tag reflecting the damage done to both Kat and Richard’s acknowledged family.

However, Richard is a man who believes all problems can be smoothed over, and he is not about to take no for an answer. He sets his hotshot lawyer Flynn Carlyon the task of changing her mind. Flynn is both charming and cynical and he relishes a challenge. He understands the nature of his client but he is also arrogant enough to think he knows what is best for Kat and that she will benefit from meeting the brothers and sisters she never knew.

The chemistry between Kat and Flynn is instant; it smoulders between them waiting for one small spark to trigger combustion. Flynn sets the scene. After all, he is willing and able to use all his charms to change Kat’s mind. He knows and she knows it. Kat’s mind may be strong but her body is tempted, so very tempted. Meanwhile Kat gets the audition of a lifetime only to find out it will pair her with Elisabetta, the one person in theatre with a good reason for wishing she doesn’t exist. Could her life get any more complicated?

Flynn is also finding his life unexpectedly complicated by his latest assignment. As he gets to know Kat, he realises he couldn’t (and doesn’t want to) force her into the decision to acknowledge Richard, no matter how much he thinks she deserves a place in the Ravensdale family.

As a reader, I was conflicted as Kat closed in on an inevitable meeting with her father. Part of me wanted to encourage her to turn her back and walk away in the hope it might teach him a long overdue lesson. However, another part of me knew that there is little point in cutting of your nose to spite your face. Pride alone cannot change facts and, as a rule, the earlier those facts are faced, the better. Sometimes there are even unexpected bonuses to meeting challenges head on. Would that prove true for Kate. Could her fledgling relationship  with Flynn withstand the assault of everyday complications and conflicting loyalties, especially with the whole world watching? You’ll have to read The Most Scandalous Ravensdale to find out.

Within both the confines of Kat and Flynn’s relationship and the series as a whole Melanie Milburne has examined the concept of family and what it means. Her view is prosaic and not at all rose-coloured. An adopted child who is always the ugly duckling of his family. A single parent family where the daughter is the caregiver. A tight-knit but dysfunctional family where the façade displays one truth and the occupants know another. The varied reasons why people remain tied by by blood and need. The happy family which offers hope that others can build their own. Can love conquer all? How?

It’s difficult to develop a passionate happy ending for two characters and include thoughtful observations on the nature of family, the ties that bind and the way those ties influence and affect us in a short novel; somehow Melanie gets it right.

I enjoyed Kat and Flynn’s story very much; I just wish I could have spent a little more time with
them.

I won a copy of The Most Scandalous Ravensdale via Harlequin Junkie and was delighted to read the final instalment in this series.

Australian Melanie Milburne is a USA Today bestselling author. She started reading Mills & Boon romances when she was seventeen. Luckily, reading is the best form of research for a writer so she is able to combine work and pleasure. Melanie has won several awards including the Australian Romance Readers Association’s (ARRA) most popular category series romance in 2008 and the prestigious Romance Writers of Australia RUBY award in 2011. You can find out more about Melanie, her books and how to connect with her on her website.

1 thought on “New book review: The Most Scandalous Ravensdale by Melanie Milburne”